WII recruitment 2018 notification has been released on official website www.wii.gov.in for the recruitment of total 12 (twelve) jobs out of which 08 (eight) vacancies for Project Fellow, 02 (two) for Project Biologists & 02 (two) Project Interns Vacancies. Job seekers should apply on or before 27th March 2018. 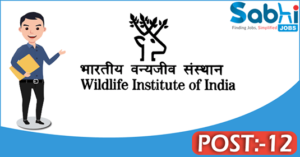 Here on this page you will get the details like the Name of vacancies released by WII with exact number of posts. Some other criteria like Education details, application fee and way to apply application for WII recruitment 2018.

You need to check the eligibility criteria carefully before applying the application form for any post, if your profile is not matching with requirement then kindly do not apply as your application form will not be approved.

Note: Check the official notification to get detailed information regarding eligibility criteria.

The candidate’s selection will be happening as per the below process.

Fee charges: There is no application fee

Interested and eligible aspirants may apply in prescribed application form along with self-attested photo copies of certificates send by email to levl@wii.gov.in & mmu@wii.gov.in on or before 27.03.2018.